Sociologists Kimberly Kay Hoang and Rhacel Salazar Parrenas are the co-editors of an anthology titled, Human Trafficking Reconsidered: Rethinking the Problem, Envision New Solutions. The anthology brings together a diversity of perspectives from a wide-range of disciplines (academic and beyond academia).

My chapter, “The Limitations of End Demand Strategies,” included in the anthology, examines the heternormative, gender, and race, limitations of current end demand strategies. My chapter is an invitation to think beyond supply and demand as a strategy in anti-trafficking efforts. 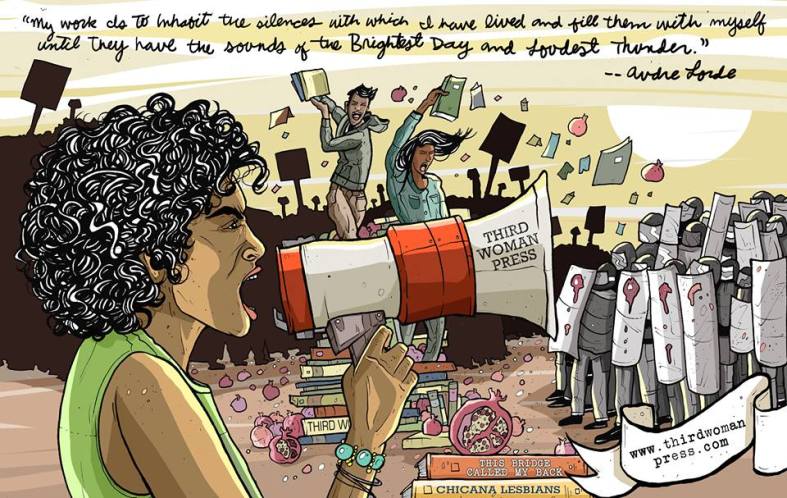 Description
An anthology, co-edited by five feminist scholars of color – Annie Isabel Fukushima, Rosalee Gonzalez, Layli Maparyan, Anita Revilla, and Matt Richardson – propels the mission of TWP by bringing together a variety of expertise and interests to this project and striving for an inclusive approach to sharing the experiences of people of color and Indigenous Peoples engaged in local and transnational social change.

About the Publisher
Third Woman Press (TWP) bridges transnational, Third World communities in resistance that understand and develop historical and site-specific thought as central to global decolonization. Third Woman Press strives to critique and dismantle hegemonic models of what counts as knowledge, its production, its circulation, and its interpretation. In doing so, the Press brings together an alter community of critical scholars, artists and activists committed to bringing many silenced voices from the margins to the center of knowledge production. TWP fosters, bridges, and expands access to the work of activist thinkers and actors invested in our decolonization. We acknowledge the power of the relationship between the writer/artist and the reader/viewer to invite and precipitate transformation in the material, physical and spiritual conditions of our existence. We encourage critical attention to not only the deepening of existing economic, social, cultural, civil, political, and spiritual injustices but also to the emergence of new ones. Third Woman Press is committed to the promotion of self-knowledge for Third World peoples and a dynamic language for self-authorized transfiguration.

The Co-Editors’ Goals
We situate this forthcoming anthology in conversation with a body of writers, artists, activists, and scholars who have over the years contributed to a genealogy of feminisms in collections such as This Bridge Called My Back: Writings by Radical Women of Color (1981), Home Girls: A Black Feminist Anthology (1983), Making Waves: An Anthology of Writings by and about Asian American Women (1989), Making Face, Making Soul/Haciendo Caras: Creative and Critical Perspectives by Feminists of Color (1990), this bridge we call home: radical visions for transformation (2002), among other collections of work. Historically, collections of women of color feminisms have radically transformed United States (U.S.) perspectives through centralizing the voices of women of color and Indigenous women within the U.S.

We continue the vision of producing critical writings and art that transform lives within the U.S. These cultural and theoretical productions form coalitions across nation-state boundaries through decolonial and/or transnational feminisms. As an editorial collective, we believe that the relationships built by and among women of color and Indigenous women in the U.S. has enabled multiple solidarities inspired by those forged within from Global South. 21st century feminisms produce important interventions such as: disrupting the border of the nation-state, disrupting hetero/homonormativities and dominant feminist ideologies, and reshaping epistemologies and knowledge about women, women of color, queer, queer of color, cis, transgender.

With this project, we wish to form connections amongst diasporic feminists, feminist/womanist, Indigenous feminists, queer people of color, and women of color across generations and locations. Because the alliances built by feminists and queers of color in the U.S. are deeply shaped by the global south/Third World perspectives, we extend an invitation to individuals and collectives in and outside of the U.S., including those that may offer a transnational perspective. We invite submissions from decolonial feminists, Indigenous feminists, queer of color feminists, transgender of color feminists, transnational feminists, women of color feminists, and womanists who address: What is a feminist epistemology, methodology and practice in the 21st century for radical queer and feminists of color? Recognizing that coalitions are forged across time and space, how are feminist knowledges of the present informed by history and visions of a new present? What new alliances have been forged that must be brought to the center, since the 1981 bridge built by radical feminists of color? What are the processes, contentions and achievements when building links that enable solidarity and social change?

Submit Your Work!
We encourage contributions that are in conversation (directly or indirectly) with the body of feminist/womanist works that have come before and that continue to shape queer and feminist of color epistemology and practice. We seek scholarly and creative essays, testimonials, poetry, and art that will contribute to our understanding and practices of social change, healing, and transformation.

We will address the hegemony of English in this text; therefore, we invite works that offer critical insight into language and queer, people of color, and Indigenous feminisms within the U.S. and beyond. Given our commitment to both local and transnational perspectives, we invite bilingual and non-English submissions. However, because our editorial collective is unable to represent all languages of the world, we invite non-English contributions to either submit a bilingual (translated) text or consider inviting a collaborator who can translate the work into English and the interpreter will be credited in the published anthology.

Submit full essays as Word documents and/or high-resolution images of original artwork as JPEG files for consideration by May 15, 2014, 11:59 pm PDT. Include with the submission a 300-word abstract and 50-word biography (PDF or Word document). Manuscripts must not exceed 20 pages (5,000 words).